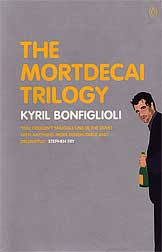 Below is an excerpt of the article found here:  http://www.buzzsugar.com/Johnny-Depp-Adapting-Mortdecai-Trilogy-30877008

"Johnny Depp is planning to adapt the comedic crime novel The Great Mortdecai Moustache Mystery for the big screen. We recently interviewed Depp in Santa Fe, NM, as he promotedThe Lone Ranger, and he told us he's hopeful the project will be his next. "There's a great series of books by a guy named Kyril Bonfiglioli called The Mortdecai Trilogy," he said. "There's one called The Great Mortdecai Moustache Mystery, and it's a very funny series of books and a very interesting character."
The fictional star of Bonfiglioli's books is Charlie Mortdecai — a wealthy art dealer with a penchant for good food, bourbon, and fine clothes — who frequently finds himself caught up in strange cases of crime and espionage. The final novel in the series, The Great Mortdecai Moustache Mystery, revolves around his investigation into the death of a woman at Oxford college . . . as well as his obsessive maintenance of his facial hair. The off-kilter book was widely praised by critics when it was published after the author's death in 1996."