Mark Henshaw's debut thriller is out in paperback now!  I love this book! It's smart, well plotted and the action never stops!

Last year I was fortunate to be able to visit with Mark about RED CELL and you can read my interview with Mark  here on Novel Chatter. 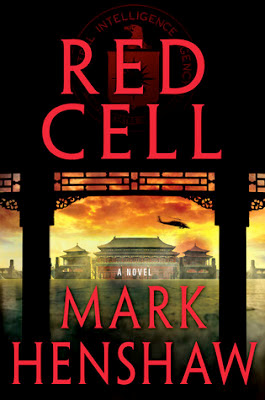 Blurb from the publisher:

Rookie case officer Kyra Stryker is back in Langley after a disastrous assignment has given her a bullet hole in her arm and a chip on her shoulder. She’s placed in the Red Cell, the CIA’s out-of-the-box think tank, working with Jonathan Burke, one of the Agency’s most ingenious analysts—and biggest outcasts. When the fragile peace between China and Taiwan is violently disrupted and the Chinese are ready to invade, CIA director Kathy Cooke turns to the Red Cell for Intel. Why would the Chinese risk war with America? Their only lead is the top CIA asset in China, code-named Pioneer, and his position has been compromised. With Burke’s tactical help, Stryker embarks on a daring mission: extract Pioneer before he can be arrested. The secrets he holds could mean the difference between peace in the Pacific or another world war.

** This book was originally provided to me by the publisher in exchange for an honest review.