On Heaven and Earth: Pope Francis on Faith, Family, and the Church in the Twenty-First Century by Jorge Mario Bergoglio, Abraham Skorka


Book review:  On Heaven and Earth: Pope Francis on Faith, Family, and the Church in the Twenty-First Century 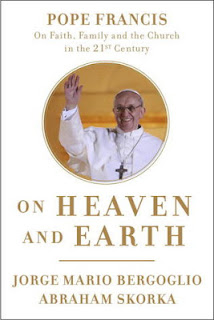 Blurb from the publisher:


From the man who became Pope Francis, Jorge Mario Bergoglio shares his thoughts on religion, reason, and the challenges the world faces in the 21st century with Abraham Skorka, a rabbi and biophysicist.

For years Cardinal Jorge Mario Bergoglio, archbishop of Argentina, and Rabbi Abraham Skorka were tenacious promoters of interreligious dialogues on faith and reason. They both sought to build bridges among Catholicism, Judaism, and the world at large. On Heaven and Earth, originally published in Argentina in 2010, brings together a series of these conversations where both men talked about various theological and worldly issues, including God, fundamentalism, atheism, abortion, homosexuality, euthanasia, same-sex marriage, and globalization. From these personal and accessible talks comes a first-hand view of the man who would become pope to 1.2 billion Catholics around the world in March 2013.

WHAT AN AMAZING BOOK!  The man who would be Pope in dialogue with an Argentine Rabbi! So what do you think these two guys found to talk about? Everything!  From God to globalization and from the devil to science, we have a beautifully expressed talk between two learned men of God.  After the first few pages, I got the feeling that I was there with them, Jorge and Abraham, listening as these two men exchange thoughts and ideas. They might debate and discuss, sharing ideas and the way they look each look at subjects and situations, but they never marginalize or dismiss the other's opinion. Such respect is rarely seen these days.

This book is intelligent and brilliant in simple ways, written so that normal people like you and me easily understand. It's no big fat theological encyclical. It's really pretty simple,  and yet it will have you thinking of things in ways you never thought possible. It's a very good read. It comes in bits and spurts, so you can read a bit, put it down and think about it...then pick it up and continue reading.  I learned a lot about what's gone on in Argentina over the past years that I had no clue about, so there's some history and political themes in there too.

I can go on and on about this book, but I think you get the idea that I really loved reading it. It's so interesting to see what Pope Francis said, to see how he works through an idea or belief, and how he shares his thoughts. Truly a deeply spiritual man, but a human 21st Century man as well.  You get to see into the mind of the man, Jorge, and it's very easy to see how he was chosen to be Pope, and why he calls himself Francis.

It's a "must read" for everyone, no matter your faith, or belief system, or lack of one, the gentleness and intelligence of these simple men of God, will move you unlike anything else you've read. Well, at least it did that for me.


**This book was provided to me by the publisher through Edelweiss and BloggingforBooks.com,  in exchange for an honest review.