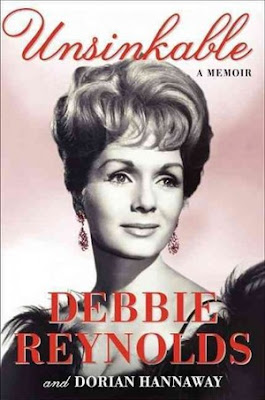 a blurb from the publisher:

The definitive memoir by legendary actress and performer Debbie Reynolds—an entertaining and moving story of enduring friendships and unbreakable family bonds, of hitting bottom and rising to the top again—that offers a unique and deeply personal perspective on Hollywood and its elite, from the glory days of MGM to the present.

Unsinkable
In the closing pages of her 1988 autobiography Debbie: My Life, Debbie Reynolds wrote about finding her "brave, loyal, and loving" new husband. After two broken marriages, this third, she believed, was her lucky charm. But within a few years, Debbie discovered that he had betrayed her emotionally and financially, nearly destroying her life.

Today, she writes, "When I read the optimistic ending of my last memoir now, I can't believe how naive I was when I wrote it. In Unsinkable, I look back at the many years since then, and share my memories of a film career that took me from the Miss Burbank Contest of 1948 to the work I did in 2012. . . . To paraphrase Bette Davis: Fasten your seatbelts, I've had a bumpy ride."

Unsinkable shines a spotlight on the resilient woman whose talent and passion for her work have endured for more than six decades. In her engaging, down-to-earth voice, Debbie shares private details about her man and money troubles, including building and losing her Las Vegas dream hotel and her treasured Hollywood memorabilia collection. Yet no matter how difficult the problems, the show always goes on.

Debbie also invites us into the close circle of her family, speaking with deep affection and honesty about her relationships with her children, Carrie and Todd Fisher. She looks back at her life as an actress during Hollywood's Golden Age—"the most magical time you could imagine"—including her lifelong friendship with (and years-long estrangement from) the legendary Elizabeth Taylor. Here, too, are stories that never reached the tabloids about numerous celebrities, such as Ava Gardner, Clark Gable, Frank Sinatra, Mick Jagger, Gene Kelly, and many more. She takes us on a guided tour through her movies with delightful, often hilarious behind-the-scenes anecdotes about every film in which she was involved, from 1948 to the present.

Frank and forthright, and featuring dozens of previously unseen photos from Debbie's personal collection, Unsinkable is a poignant reminder that there is light in the darkest times. It is a revealing portrait of a woman whose determination is an inspiration.