Blurb from the publisher:

The author of Bird in Hand and The Way Life Should Be delivers her most ambitious and powerful novel to date: a captivating story of two very different women who build an unexpected friendship: a 91-year-old woman with a hidden past as an orphan-train rider and the teenage girl whose own troubled adolescence leads her to seek answers to questions no one has ever thought to ask. 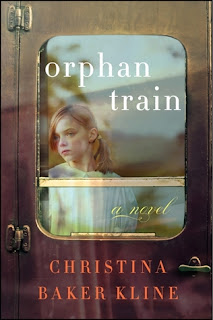 Nearly eighteen, Molly Ayer knows she has one last chance. Just months from "aging out" of the child welfare system, and close to being kicked out of her foster home, a community service position helping an elderly woman clean out her home is the only thing keeping her out of juvie and worse.

Vivian Daly has lived a quiet life on the coast of Maine. But in her attic, hidden in trunks, are vestiges of a turbulent past. As she helps Vivian sort through her possessions and memories, Molly discovers that she and Vivian aren't as different as they seem to be. A young Irish immigrant orphaned in New York City, Vivian was put on a train to the Midwest with hundreds of other children whose destinies would be determined by luck and chance.

The closer Molly grows to Vivian, the more she discovers parallels to her own life. A Penobscot Indian, she, too, is an outsider being raised by strangers, and she, too, has unanswered questions about the past. As her emotional barriers begin to crumble, Molly discovers that she has the power to help Vivian find answers to mysteries that have haunted her for her entire life - answers that will ultimately free them both.

Rich in detail and epic in scope, Orphan Train is a powerful novel of upheaval and resilience, of second chances, of unexpected friendship, and of the secrets we carry that keep us from finding out who we are.

My thoughts about Christina Baker Kline's Orphan Train:    Let me start by saying, that I really enjoyed this book. You can certainly tell that Kline did a ton of research and background into the orphan trains that moved children across the country so long ago, and I appreciate that.  I read a lot of historical novels and you get so that you can tell that the author did their homework, and Christina Baker Kline did just that!  Her story telling is stellar and Vivian's quest moved quickly forward.

Like some of you, I think, I loved Vivian's  story the most, and some of the time, I really wished that the Molly thread of the story just wasn't there. We were introduced to Molly first, and I found myself anticipating when we'd get to Vivian's part of the story. Which is a great plot trick, and it worked!   It wasn't that Molly's story wasn't well told, but I wanted Vivian's story, I think I get why the author included Molly and the people that Molly brought into the story, but I wish there had been more Vivian!  For me, it was Vivian's story that meant something. Vivian's journey was the heart of the book.

Through the journey, we learn that Irish born Vivian was named Niamh, then her too-ethnic sounding name was changed to Dorothy and then to Vivian.  The children that Niamh  made friends with on the orphan train were great snap-shot characters, baby Carmine, ever wanting to know that things were called,  and of course, the young and tough "Dutchy" aka Hans,  (who'd been alone on the streets way too long) stay with you as you turn page after page, wondering when or IF you'll encounter these orphans again.

I have a middle school aged friend, Rachel, who is an avid reader who loves finding new things to read. Rachel is always fun to hang with as she loves to talk about books. So, she asked me what I was reading, and I told her Orphan Train!  She said, "oh yeah, we learned about those trains in school, will I like the book?"  I told her Mom about the one scene, with a somewhat detailed account of an attempted rape and some of the more "salty" language from Molly and her friends, and left it up to her Mom to decide what's best for her daughter.

My only other minor whine that I have is that Vivian's story ended too quickly, it was almost like there was a dead line or a word limit that the author couldn't breech.  As readers, we bought in to the tale, only to  have it wrap up too quickly!  BUT all that aside, it's a well told story and one that I will tell others about. My whine aside, I loved it!


* This e-galley was provided to me by the publisher, through Edelweiss, in exchange for a fair and honest review.