Z: A NOVEL OF ZELDA FITZGERALD 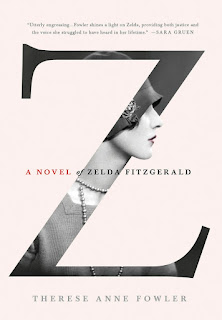 I wish I could tell everyone who thinks we’re ruined, Look closer…and you’ll see something extraordinary, mystifying, something real and true. We have never been what we seemed.

When beautiful, reckless Southern belle Zelda Sayre meets F. Scott Fitzgerald at a country club dance in 1918, she is seventeen years old and he is a young army lieutenant stationed in Alabama. Before long, the “ungettable” Zelda has fallen for him despite his unsuitability: Scott isn’t wealthy or prominent or even a Southerner, and keeps insisting, absurdly, that his writing will bring him both fortune and fame. Her father is deeply unimpressed. But after Scott sells his first novel, This Side of Paradise, to Scribner’s, Zelda optimistically boards a train north, to marry him in the vestry of St. Patrick’s Cathedral and take the rest as it comes.
What comes, here at the dawn of the Jazz Age, is unimagined attention and success and celebrity that will make Scott and Zelda legends in their own time. Everyone wants to meet the dashing young author of the scandalous novel—and his witty, perhaps even more scandalous wife. Zelda bobs her hair, adopts daring new fashions, and revels in this wild new world. Each place they go becomes a playground: New York City, Long Island, Hollywood, Paris, and the French Riviera—where they join the endless party of the glamorous, sometimes doomed Lost Generation that includes Ernest Hemingway, Sara and Gerald Murphy, and Gertrude Stein.
Everything seems new and possible.


My thoughts:   I read this book without having too much background information or prior knowledge about Scott and Zelda Fitzgerald, and I kept it that way on purpose. I mean, there are things that we all know, but I didn't seek information out. This novel is fiction wrapped around historical figures and happenings. It's not a biography and I didn't want to start comparing it to what really happened.  If I was looking for an accurate, first hand telling, I'd read Zelda's own writings. And actually, now that I've finished "Z", I think I will read what she had to say.  Not to compare, but to flesh out a very interesting, compelling and mysterious woman.


Having confessed that, I think I can go on and share some thought about Therese Anne Fowler's novel.  I felt that Fowler crafted a believable Zelda. I had nothing to compare the fictional Zelda to the real Zelda and I think that's one reason why I enjoyed this book so much. No preconceived ideas. Just like I enjoyed the movie MIDNIGHT IN PARIS, when it came out a couple of years ago, I was so taken with the people and the "literati" of Paris in the 1920s, so I was ready to suspend my "disbelief."  I really appreciated Fowler telling her story from Zelda's point of view, I thought it added to the layers of the character, from the minute she meets Fitzgerald, you know what she's thinking and that helped this reader understand her frustrations and motivations.  You see her almost being beaten down by Scott.  You see the life escaping from her body. In all honesty, it made me sad as I knew, somewhere in the back of my mind that a lot of this was true. Her stay at the Swiss clinic for her mental illness. So sad, the things they didn't know back then.

But, back to the review, Fowler's story telling was, for me, even and smooth. The introduction of "real" people into the story was seamless and always written in a way that didn't seem out of place. Fowler allows the writer in Zelda to seep through, and as with so many artistic, and talented people, there's a vulnerability and mental instability that peeks through into her ballet, her painting, even the way she treats or interacts with little Scotty...all ring true.  There in these pages, you see the lives of the people  who lived and created during that Parisian jazz age.  Fowler's brought them all to life and given Zelda a voice.

I liked it, I had some teeny issues with dialogue at times, but I ignored it, because, at the end, I just loved the spirit that the younger Zelda had, she loved life and lived it. Thank you!

I say buy it, it's a great read, tough in parts, but always readable... and then pass it on to a friend!  Give them a bottle of champagne with it.  Why not?

Just don't compare it to the Fitzgerald's real life, that's not what this one is about. It is fiction, after all!


**This e-galley was provided to me by the publisher in exchange for an honest review.