SALVAGE AND DEMOLITION by Tim Powers


Spotlight on:  SALVAGE AND DEMOLITION


Lookee what I just got!

It's the new Tim Powers novella!! 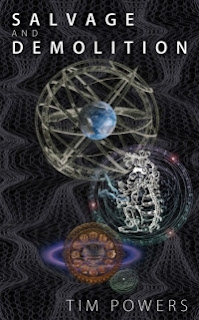 I admit it, I'm a huge Powers fan and have been waiting for this one!  I can't wait to start reading it, and wanted to let y'all know that, it's out there, go find it and buy it, in one form or another!!  Just DO it!

And of course, a blurb from the publisher, which in this case is Subterranean:

Salvage and Demolition, the astonishing new 21,000 word novella by Tim Powers, begins when Richard Blanzac, a San Francisco-based rare book dealer, opens a box of consignment items and encounters the unexpected. There, among an assortment of literary rarities, he discovers a manuscript in verse, an Ace Double Novel, and a scattering of very old cigarette butts. These commonplace objects serve as catalysts for an extraordinary--and unpredictable--adventure.Without warning, Blanzac finds himself traversing a 'circle of discontinuity' that leads from the present day to the San Francisco of 1957. Caught up in that circle are an ancient Sumerian deity, a forgotten Beat-era poet named Sophie Greenwald, and an apocalyptic cult in search of the key to absolute non-existence. With unobtrusive artistry, Powers weaves these elements into something strange and utterly compelling. The resulting story is at once a romance, a thriller, and the kind of intricately constructed time travel story that only the author of The Anubis Gates--that quintessential time travel classic--could have written. Ingenious, affecting, and endlessly inventive, Salvage and Demoliton is a compact gem from the pen of a modern master, a man whose singular creations never fail to dazzle and delight.