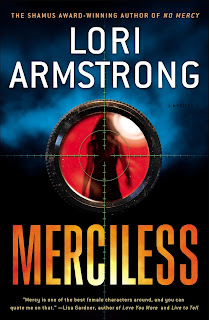 
Torn between her duties to the FBI and her need to keep her loved ones safe, former black-ops army sniper Mercy Gunderson must unleash the cold, dark, merciless killer inside her and become the predator . . . rather than the prey.

Due to job confidentiality, Mercy can’t discuss her misgivings about the baffling cases with her boyfriend, Eagle River County sheriff Mason Dawson, and the couple’s home on the ranch descends into chaos when Dawson’s eleven-year-old son Lex is sent to live with them. While Mercy struggles to find a balance, hidden political agendas and old family vendettas turn ugly, masking motives and causing a rift among the tribal police, the tribal council, and the FBI. Soon, however, Mercy realizes that the deranged killer is still at large—and is playing a dangerous game with his sights set on Mercy as his next victim.

When tragedy strikes again, Mercy is ready to throw all her energy into her own investigation, and she’s out for revenge. As she digs up the truth behind the shocking crimes, Mercy uncovers dark and dangerous secrets and must race to stop a killer before everything she’s fought for is destroyed forever.

Newly minted agent Mercy Gunderson is back and ready for action- unfortunately, she’s stuck doing paperwork in an overheated government office building. But she gets more than she bargained for when she’s thrown into her first FBI murder case, working with the tribal police on the Eagle River Reservation, where the victim is the teenage niece of the recently elected tribal president. When another gruesome killing occurs during the early stages of the investigation, Mercy and fellow FBI agent Shay Turnbull are at odds about whether the crimes are connected.


My thoughts about Merciless up next!