by Woody Guthrie is out next month and I am so excited!   HOUSE OF EARTH is due in stores and on e-readers February 05. 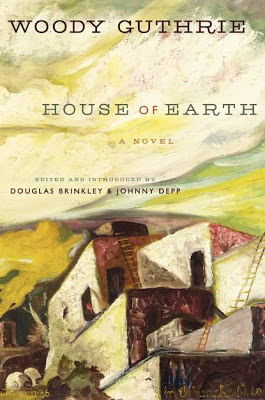 Here's what the publisher says about this amazing book, written in 1947 and never published before!


Available at last-legendary folk singer and American icon Woody Guthrie's only finished novel: a prophetic and powerful portrait of two hardscrabble farmers struggling to survive the elements and other powerful forces of destruction during the Dust Bowl, introduced by Douglas Brinkley and Johnny Depp
Finished in 1947, House of Earth is Woody Guthrie's long-lost and only fully realized novel-a powerful portrait of Dust Bowl America, filled with the homespun lyricism and authenticity that have made his songs a part of our national consciousness. It is the story of an ordinary couple's dreams of a better life and their search for love and meaning in a corrupt world.

Tike and Ella May Hamlin struggle to plant roots in the arid land of the Texas Panhandle. Living in a precarious wooden farm shack, Tike yearns for a sturdy house that will protect them from the treacherous elements. Thanks to a five-cent government pamphlet, he has the know-how to build a simple adobe dwelling, a structure made from the land itself-fireproof, windproof, Dust-Bowl proof. A house of earth.
Though they are one with the the farm and each other, the land on which Tike and Ella May live and work is not theirs. Thanks to larger forces beyond their control-including ranching conglomerates and banks-their adobe house remains painfully out of reach.


The one and only novel written by Woody Guthrie, House of Earth was lost for more than sixty years. It is a singular look into the soul and passion of one of America's greatest artists.