Thy Neighbor by Norah Vincent

The mid-summer blitz book for today is: 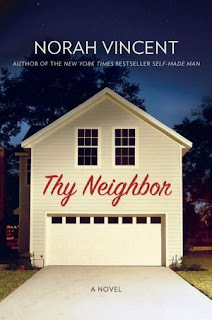 Synopsis from the publisher:

At thirty-four, Nick Walsh is a broken, deeply cynical man. Since the violent deaths of his parents thirteen years earlier, he has been living alone in his childhood home in the suburban Midwest, drinking, drugging, and debauching himself into oblivion. A measure of solace is provided by his newly found relationship with Monica, a mysterious woman who seems to harbor as many secrets as he does.

Obsessed with understanding the circumstances surrounding his parents' deaths and deranged by his relentless sorrow, Nick begins a campaign of spying on his neighbors via hidden cameras and microphones he has covertly installed in their houses. As he observes with amusement and disbelief all the strange, sad, and terrifying things that his neighbors do to themselves and to one another, and as he, in turn, learns that he is being stalked, he begins to slowly unravel the shocking truth about how and why his parents died.

At once unsettling and moving, humorous and horrifying, Thy Neighbor explores the nature of grief, the potential isolation of suburban life, and who we really are when we think no one is watching. What readers and critics have admired in Norah Vincent's nonfiction is completely unleashed in this vivid and provocative novel.

This book was provided to me by the publisher through NetGalley.