"No Rest For The Dead" now in paperback

Look what's now out in paperback!!  I really liked No Rest for the Dead and think you will too! 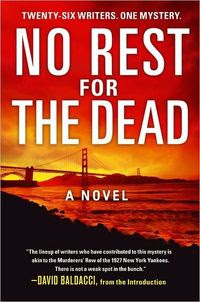 No Rest for the Dead

No Rest for the Dead
By: Sandra Brown, R.L. Stine, Lisa Scottoline and Jeffery Deaver.


The publisher's synopsis: More than twenty New York Times bestselling authors team up to create a first-rate serial novel -- a collaboration that combines the skills of America's greatest storytellers to produce a gripping, spellbinding mystery.


When Christopher Thomas, a ruthless curator at San Francisco's McFall Art Museum, is murdered and his decaying body is found in an iron maiden in a Berlin museum, his wife, Rosemary, is the primary suspect, and she is tried, convicted and executed. Ten years later, Jon Nunn, the detective who cracked the case, is convinced that the wrong person was put to death. In the years since the case was closed, he's discovered a web of deceit and betrayal surrounding the Thomases that could implicate any number of people in the crime. With the help of the dead woman's friend, he plans to gather everyone who was there the night Christopher died and finally uncover the truth, suspect by suspect. Solving this case may be Nunn's last chance for redemption … but the shadowy forces behind Christopher's death will stop at nothing to silence the past forever. In this innovative storytelling approach, each of these twenty-five bestselling writers brings their distinctive voice to a chapter of the narrative, building the tension to a shocking, explosive finale. No Rest for the Dead is a thrilling, page-turning accomplishment that only America's very best authors could achieve.

Twenty six authors writing in collaboration to tell the story of an innocent woman wrongly executed for her husband's murder. Huh? Twenty six authors? One book? When I read the synopsis of No Rest for the Dead  and then looked at the list of contributing authors I knew that I just had to read this book. Could this work?  WOULD this work?  Yes it works just fine, thank you!   Each author writes one chapter, or story, labeled with their name so you do know who wrote what. But the "who wrote what" dynamic quickly gets back burnered.  Some of the writers aren't normally  favorites but in No Rest for the Dead, it didn't matter to me. Every chapter and every story was seamless, every word was brilliant.  What matters is that No Rest for the Dead is a great read and a great who-done-it.As requested by the deceased  innocent Rosemary Thomas in her will, ten years after her execution, all who were present on the night of her her husband's murder are to be brought together again in a sort of memorial. A letter is to be read by Rosemary's best friend. I immediately expected a "Nick Charles" type of scene when I read that all of the suspects would be together in one room. Nope...didn't happen. And that's OK.  There's another, more interesting way that the facts are exposed and the mystery is solved.No Rest for the Dead is a well told, well laid out and plotted mystery, I couldn't stop reading it. It's rather like a well designed quilt, all of the separate pieces are finally stitched together to make a solid piece. It's the fine stitching and the weaving of the threads that bind the pieces that make the finished quilt strong and sturdy. That's what you have in No Rest for the Dead. A strong and well crafted story.
Hands down, this is one of the best books I've read this year!  The solution took me by surprise and no,  I didn't see it coming.  And I can usually figure these things out. Buy it, read it, share it.4 1/2 out of 5 stars
This e-galley was provided to me by the publisher and in no way affected my review.


According to the book's official website:; A brother-and-sister editing team, Andrew and Lamia Gulli have arranged to donate all proceeds from No Rest for the Dead (excluding contributor expenses) to the Leukemia & Lymphoma Society.