The mid-summer blitz book for today is: 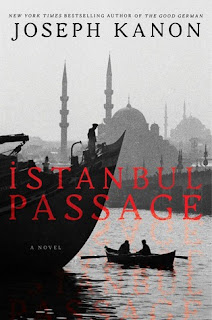 
A neutral capital straddling Europe and Asia, Istanbul has spent the war as a magnet for refugees and spies. Even American businessman Leon Bauer has been drawn into this shadow world, doing undercover odd jobs and courier runs for the Allied war effort. Now, as the espionage community begins to pack up and an apprehensive city prepares for the grim realities of post-war life, he is given one more assignment, a routine job that goes fatally wrong, plunging him into a tangle of intrigue and moral confusion.
Leon's attempt to save one life leads to a desperate manhunt and a maze of shifting loyalties that threatens his own. Istanbul Passage is the story of a man swept up in the aftermath of war, an unexpected love affair, and a city as deceptive as the calm surface waters of the Bosphorus that divides it.

What I want you to know:

Author Joseph Kanon has done his homework as a storyteller with Istanbul Passage!  This book won't disappoint, it moves quickly as you are sucked in from the first page. It's set in post war Istanbul in 1945 and while it's technically a thriller, I think it's just as much a moral examination of the choices that we all make in tough situations.

In this spotlight review, I want you to know that it touches on the many things that makes a  great spy thriller; it's set in a frenetic time frame for the world,  it's a fabulous read, it's got a well drawn romance, along with a ton of spies, chases, red herrings,  and some nicely drawn, detailed character development and it leaves you wanting more.

** This book was provided to me by the publisher through NetGalley and in no way affected my thoughts about this book.