Oscar Wilde and the Vatican Murders by Gyles Brandreth 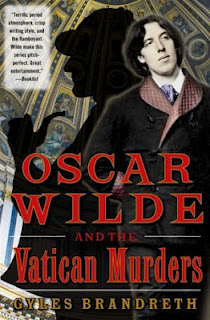 Oscar Wilde and the Vatican Murders
by Gyles Brandreth

Oscar Wilde makes a triumphant return in the fifth novel in the critically acclaimed historical mystery series, featuring Wilde as the detective aided by his friend Sir Arthur Conan Doyle.

In 1892 Arthur Conan Doyle, exhausted by his creation Sherlock Holmes, retires to the spa at Bad Homburg. But his rest cure does not go as planned. The first person he encounters is Oscar Wilde, and when the two friends make a series of macabre discoveries amongst the portmanteau of fan mail Conan Doyle has brought to answer - a severed finger, a lock of hair and finally an entire severed hand - the game is once more afoot.


The trail leads to Rome, to the very heart of the Eternal City, the Vatican itself. Pope Pius IX has just died. These are uncertain times. To uncover the mystery and why the creator of Sherlock Holmes has been summoned in this way, Oscar and Conan Doyle must penetrate the innermost circle of the Catholic Church - seven men who have a very great deal to lose.


I have to say that I love this series! I also have to say that Vatican Murders, isn't my favorite, but in a series this full of fun, it's a fun read!  While in Rome this time, Brandreth gives us a ton of new characters, almost too many at times to keep up with. But that just makes for more plot threads and more dead-end Roman alleys to wander down.


This time the action puts Arthur Conan Doyle in the forefront, and be aware of  a Holmes regular, Irene Sadler, popping up.  Oscar Wilde and the Vatican Murders is Gyles Brandreth's fifth entry in this engaging series. It's well told, nicely plotted, evenly written story.


It's well worth the read and I hope you do add it to your "must read" list, just don't mind a stray body part here and there.

* This book was sent to me by the publisher, in exchange for a fair and honest review.