The Book of Lost Fragrances by M.J. Rose 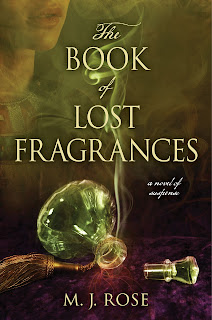 The Book of Lost Fragrances

What the publisher wants you to know:

A sweeping and suspenseful tale of secrets, intrigue, and lovers separated by time, all connected through the mystical qualities of a perfume created in the days of Cleopatra—and lost for 2,000 years.

Jac L’Etoile has always been haunted by the past, her memories infused with the exotic scents that she grew up surrounded by as the heir to a storied French perfume company. In order to flee the pain of those remembrances—and of her mother’s suicide—she moves to America, leaving the company in the hands of her brother Robbie. But when Robbie hints at an earth-shattering discovery in the family archives and then suddenly goes missing—leaving a dead body in his wake—Jac is plunged into a world she thought she’d left behind.

Back in Paris to investigate her brother’s disappearance, Jac discovers a secret the House of L’Etoile has been hiding since 1799: a scent that unlocks the mysteries of reincarnation. The Book of Lost Fragrances fuses history, passion, and suspense, moving from Cleopatra’s Egypt and the terrors of revolutionary France to Tibet’s battle with China and the glamour of modern-day Paris. Jac’s quest for the ancient perfume someone is willing to kill for becomes the key to understanding her own troubled past.

My thoughts about The Book of Lost Fragrances:

I've read that the author burned highly perfumed candles while crafting this hypnotic story and I can see why. Layer upon layer of stories and characters, drifting back and forth over two thousand years of fragrances make this a winner.

I was intrigued by the synopsis of this book as I've always been someone who associates fragrances, scents and smells with people and memories in my own life. Whenever I smell juniper trees it reminds me of a treasured great aunt, whose old house on a hill was surrounded by them, and in the air, after a rain, the scents of the junipers that filled the air were like perfume to me. Fresh baked bread always takes me back to my grandmother's kitchen as us kids waited for the bread to cool so she could slice into it and then thickly smear on the lusciously fragrant home made strawberry jam.  I'll never pass a fragrance counter without stopping at the Joy bottle and spritzing a bit on my wrist so the wafts bring my Mom back to me.

These are the sorts of things that permeate M. J. Rose's The Book of Lost Fragrances.  It wasn't until I had finished the book and sat down to write this review that I learned that this is part of M.J. Rose's Rein­car­na­tion­ist series, don't let that scare you away from this book, it's fabulous on its own.

I liked that Rose told the story from multiple perspectives as it helped the story flow a bit easier. Sometimes the many plots and stories could get a bit confusing, but I was so entranced with the book that I just kept reading.  I don't believe in reincarnation, but I accepted it as a plot device that made the ancient Egyptian plot lines easy to buy into, even though I easily saw some twists and turns coming.

All in all, I would have liked a bit more character development as I really like to know the characters, but I suppose the author gave us what she felt the readers needed. It's sure a mystical read!

**This was provided to me by the publishers through NetGalley and that in no way affected my ability to write an honest review.