OK I admit it. I'm a closet graphic novel fan!  There. I said it. While I'm coming clean, I'm also a closet baseball fan.  I know, I know. That has nothing to do with anything here. But it's spring and I thought I just get that out there.


Great news fellow graphic novel junkies! Radical has just announced the release of one of my very favorite graphic novels:  Caliber: First Canon of Justice by Sam Sarkar in digital format through iTunes!

The details are in their press release below. Download it, you'll love the story and the artwork!  Sam Sarkar and Garrie Gastonny are brilliant! 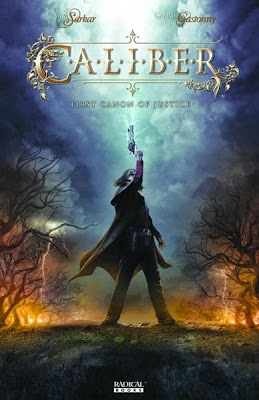 FOR IMMEDIATE RELEASE
Radical Publishing Announces Release of Digital Comics and Novels on iTunes
March 22, 2012, Los Angeles, CA – Radical Publishing is excited to announce the release of its comics and graphic novels in digital format through iTunes.
Beginning this week, Radical will be releasing several of its series, including Caliber: First Canon of Justice, The Last Days of American Crime, and Time Bomb, along with other fan-favorite trades and graphic novels, for iBooks 2.0.
Additional graphic novels released include Aladdin: Legacy of the Lost, City of Dust: A Philip Khrome Story, Driver for the Dead, Hercules: The Knives of Kush, Hotwire: Requiem for the Dead, Legends: The Enchanted, The Lords of Misrule, Mateki: The Magic Flute, and Shrapnel: Hubris.
Fans of Radical can link directly to the iTunes store from the “Titles” section atwww.RadicalPublishing.com or search the Apple bookstore for these titles to read and interact with Radical’s state-of-the-art imagery.
Over the coming weeks, Radical will continue to release more of its award-winning catalog through the iTunes bookstore.  Stay informed about new digital releases by liking Radical’s Facebook page at www.Facebook.com/RadicalPublishing, following Radical’s YouTube channel at www.YouTube.com/RadicalPublishing, or following @RadicalComics on Twitter.