Death of a Kingfisher by M.C. Beaton 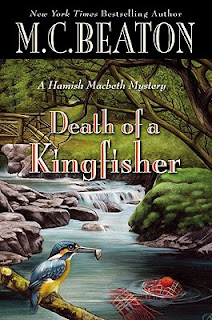 Death of a Kingfisher


When Scotland is hit by the recession, Police Constable Hamish Macbeth notices that the Highland people are forced to come up with inventive ways to lure tourists to their sleepy towns. The quaint village of Braikie doesn't have much to offer, other than a place of rare beauty called Buchan's Wood, which was bequeathed to the town. The savvy local tourist director renames the woods "The Fairy Glen," and has brochures printed with a beautiful photograph of a kingfisher rising from a pond on the cover.
It isn't long before coach tours begin to arrive. But just as the town's luck starts to turn, a kingfisher is found hanging from a branch in the woods with a noose around its neck. As a wave of vandalism threatens to ruin Braikie forever, the town turns to Hamish Macbeth. And when violence strikes again,the lawman's investigation quickly turns from animal cruelty to murder.

I love Hamish Macbeth! I'm a card carrying fan of M.C. Beaton's series. Always have been. So here's where I have a quandry, as I was a bit disappointed in Death of a Kingfisher.   I thought the book started out beautifully and was at that point absolutely up to Beaton's high standards of writing and plotting, but somewhere towards the last third, the story seemed to fall apart for me. And this never happens with Beaton's books.

I really enjoyed the introduction of some new characters and was happy to see the newbies come to town, especially their new constable, Dick Frasier. I know it's hard for authors to keep inventing new people and situations to keep us long time readers happy and I liked the way Hamish and Dick interacted.   However, in this entry to the Hamish Macbeth series  I would have liked to have had the rest of the characters a bit more fleshing out. I hope that we get to know them better in the next book. And yikes... there were so many murders that I struggled for a bit to keep up with everything. I have always loved this series and I hope that this is just a teeny slip.


Even though I may seem a bit nit-picky, it's only because I've come to expect so much.  I still give Death of a Kingfisher a huge two-thumbs up!  It's hands down a better book that so many others out there. All things considered, it's still very enjoyable and great fun to read.


I give Death of a Kingfisher 4 out of 5 stars!


**This book was provided to my by the publisher through Book Blogs and that in no way affected my ability to write an honest review.