The Beastly Beatitudes of Balthazar B is headed to the screen!


What a better way to celebrate St. Paddy's than to get this news this week!  I am a huge fan of J.P. Donleavy and have had the honor of interviewing him a few years ago!  You can read what he had to say to us here! 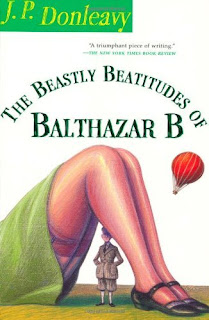 Thanks to Donleavy-Mitchell Productions and Honora Productions, J.P. Donleavy's wonderfully endearing 1968 novel,  The Beastly Beatitudes of Balthazar B is getting closer and closer to being on a screen near us all!

Bob Mitchell of Donleavy- Mitchell Productions and Giles Andrew from Honora are producing and Mitchell tells me that the screenplay will be penned by Donleavy himself and his son Philip Donleavy.

This is a second project for the father and son writing team. The Donleavys have adapted Donleavy's once banned literary classic, The Ginger Man, also with Mitchell and Philip Donleavy producing, as a vehicle for Johnny Depp. Depp has since signed on as a producer for The Ginger Man.