I can't wait to read this one!!  Yeah, I'm one of those kids who used to race home to watch Jonathan Frid, as the tortured Barnabas Collins, sink his vampire teeth into the pale necks of Collinsport women, while trying to decide if I'd rather be Angelique or Josette. Gotta love this book! 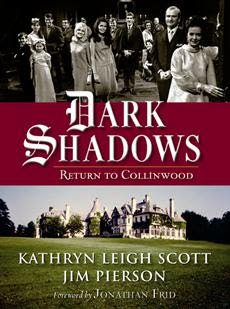 With a foreword by Jonathan Frid, who created the role of Barnabas Collins,
this new book includes hundreds of rare photographs and behind-the-scenes
anecdotes from Kathryn Leigh Scott (Josette DuPrés), Jonathan Frid (Barnabas
Collins), Lara Parker (Angelique Bouchard) and David Selby (Quentin
Collins), who appear in cameo roles with Johnny Depp, Helena Bonham Carter
and Michelle Pfeiffer in the new Gothic epic feature film Dark Shadows to be
released May 2012. With the ongoing fascination for all things vampiric, this
book, about the making of the new film and the history of the original series, is
an enticing volume for new and old fans alike.

In its heyday, the original Dark Shadows daytime series (ABC-TV, 1966-1971)
attracted 20 million viewers. The spooky, literate, romance and horror-driven
show had universal appeal -- and came to be known as the program “kids ran
home from school to watch.” Reruns and DVD releases of all 1,225 episodes
have spawned new generations of Dark Shadows fans, who attend annual Dark
Shadows Festivals where cast members reunite to celebrate the show’s unending popularity.

Authors Kathryn Leigh Scott and Jim Pierson have previously collaborated on
five top-selling books about Dark Shadows and a coffee table book about the
career of its creator, the late producer-director Dan Curtis.