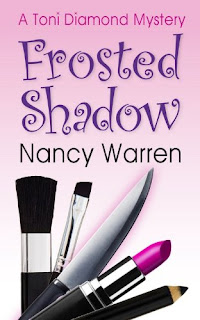 There’s nothing pretty about murder.


Meet Toni Diamond, make up artist to middle America. She’s also got a nose for trouble and a passion for solving mysteries. Imagine Columbo in a lavender suit. She never met a woman who wouldn’t look better with a little help from the Lady Bianca line of cosmetics. But don’t be fooled by appearances. Underneath the fake diamonds and the big hair is a sharp brain and a keen eye that sees the details as well as the funny side of life. When a Lady Bianca sales rep is murdered at the annual convention in Dallas, Toni is the one who notices things that some people, like sexy Detective Luke Marciano, might easily miss. Only someone who understands as much about how to make appearances deceiving could see into the mind of this killer -- a murderer who wants to give Toni a permanent makeover. Into a dead woman.

Grab your lipstick and slide into your stillettos and get ready to join Lady Bianca star salesrep Toni Diamond, makeup adviser turned part time sleuth, in a fun filled, murder prone annual sales convention for the Lady Bianca line of cosmetics in Frosted Shadow. It looks like beauty isn't only skin deep, it can be deadly!   But don't get the wrong idea, this is no piece of fluff. Frosted Shadow author Nancy Warren has written a smart, tech savvy, astute character in Toni Diamond!  Toni's no simpering southern belle. She's a smart, inquisitive corporate executive who just happens to sell cosmetics, seems that her only problem is that she keeps finding herself around dead bodies.  But their makeup is stunning!

This is one of the most fun books I've read in a long time. Pure escapism in the highest form!!  Warren knows how to tell a tale and smartly keeps the characters to a minimum, while getting the most "bang" for the buck. OK, I had to say that. I'm happy to say that Frosted Shadow looks to be the first in a series for the well groomed, and whip smart character Toni Diamond!  Toni's the hard working, single mom of a teen aged goth-loving daughter who's tendency towards black frustrates the pastel loving Toni.  I really enjoyed Toni's Dolly Parton loving mother, she's a fun loving good-old-gal who provides support for Toni and a bit of distraction for the reader. You HAVE to love her.

And then there's the cute and sexy police detective, Luke Marciano who can't quite figure out Toni. Her Lady Bianca sales tactics throw him for a loop, but not for long,  He realizes there's a brain behind Toni's perfectly made up face and a heart under her lavender suit. He even acquiesces to trying the cuticle and hand creme Toni gives him. Even if it is in a lavender tube.

The story line is kept sharp and uncluttered by Warren, her characters are clearly defined and there's enough red herrings tossed around to keep you guessing until the end. I had it narrowed down to two possible murderers and would have been satisfied (as the reader) if either had been the culprit.  I'll "cut" to the chase...bravo Ms. Warren. Bring me more of Toni Diamond!

I took my e-reader with me everywhere when I was reading Frosted Shadow!  I'd love to see this book in trade paperback form as I'd love to be able to share it with those who don't have an e-reader or just don't like the reading experience of a cold plastic device. Yes, that'e me.  Hello!!! Publishers!!! BUY this for publication!!!  If you do, I will too! Would love to give this one as gifts!!!  In the mean time, pick it up on Amazon or Smashwords.

** This book was provided to me for review by the author, and in no way did that affect my honest review.