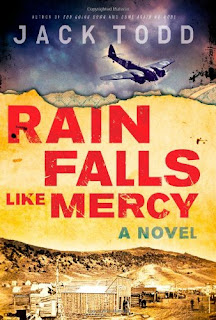 
Set against the sweeping backdrop of World War II, Rain Falls Like Mercy is a gripping depiction of a family and a country touched by the grand violence of war, the senseless violence of crime, and the intimate violence of the heart.


IN THE TRADITION OF TRUE CRIME narratives such as In Cold Blood, acclaimed author Jack Todd’s new novel grips the reader from the first page; and as it spans continents and generations of one family, its taut and shocking undercurrent of violence builds to a stunning crescendo. Todd’s first novel, Sun Going Down, which introduced the Paint family, won praise from reviewers and major authors such as Michael Korda and Michael Blake. His second novel, Come Again No More, recounted the Paints’ saga of triumph and tragedy through the Great Depression, inspiring the Ottawa Citizen to label Todd “a first-rate novelist with a tender heart.”

Rain Falls Like Mercy opens with the murder investigation of a young girl in Wyoming in mid- 1941. Tom Call, the young sheriff running the investigation, falls in love with Juanita, the wife of Eli Paint, whose son Leo and grandson Bobby Watson are on duty with the U.S. Navy. Almost overnight, the case is derailed by the Japanese attack on Pearl Harbor, disrupting the lives of all involved. Bobby mans an antiaircraft gun during the attack. Tom joins the U.S. Air Force and is deployed to England to fly bombers, still trying to pursue his murder investigation. His suspicion falls on Pardo Bury, the psychotic son of a wealthy rancher in Wyoming.

As Pardo and Tom make their ways to their inevitable and shattering confrontation, Rain Falls Like Mercy displays Todd’s uncanny ability to zero in on his characters’ emotional lives while simultaneously painting a sweeping picture of the historical events that shape their destinies.

First off, I really like the title!  It's descriptive and clever.  This is the third book in Jack Todd's series about the Paint family and I don't think it's necessary that you have read the first two in the series.  I enjoyed this read, I thought the characters were well written and the story line well plotted.  But I think the publisher's comparison to "narratives such as In Cold Blood" is a bit of a stretch.  I don't want to over-sell this book, but I don't want to under rate it either.

Set in 1941, before the attack on Pearl Harbor and spanning the time after, author Jack Todd does a great job of placing you in that small community in Wyoming. So many historical fiction stories that take place in this time frame are set in larger communities and big cities. By placing the story in a smaller community the reader is given a true slice of small town life, and the opportunity to see how all of the character fit together.

Todd deftly plots the murders and their surrounding clues with a fine hand, keeping the reader flipping pages and wondering where you'll be taken next, all of the things that make for a great mystery.

I do want to offer a warning, Rain Falls Like Mercy contains strong language and violence that could be unsettling.

All in all, I enjoyed the book and look forward to reading more from Jack Todd.

**This e-galley was sent to me by the publisher, Touchstone, and that in no way affected my review.