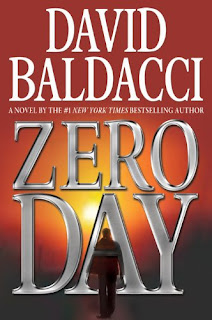 The publisher tells us:  John Puller is a combat veteran and the best military investigator in the U.S. Army's Criminal Investigative Division. His father was an Army fighting legend, and his brother is serving a life sentence for treason in a federal military prison. Puller has an indomitable spirit and an unstoppable drive to find the truth.


Now, Puller is called out on a case in a remote, rural area in West Virginia coal country far from any military outpost. Someone has stumbled onto a brutal crime scene, a family slaughtered. The local homicide detective, a headstrong woman with personal demons of her own, joins forces with Puller in the investigation. As Puller digs through deception after deception, he realizes that absolutely nothing he's seen in this small town, and no one in it, are what they seem. Facing a potential conspiracy that reaches far beyond the hills of West Virginia, he is one man on the hunt for justice against an overwhelming force.


What I like the most about David Baldacci's writing is that he always starts his stories out with engaging and engrossing action!  And in his latest Zero Day, he doesn't let us down. John Puller is as strong and solid a character as Baldacci's written in a long time. I've been a Baldacci fan since I first read Absolute Power.  I like Baldacci's writing style. I like the way he puts words together without a lot of fluff.  It's at the beginning of the second chapter when he gives us what we need to know about lead character John Puller.

That was why John Puller was here."

Not long after Puller arrives in the coal mining community,  there's a couple of murders and  Puller wonders why he's alone in this. Or is he?  Government secrets, betrayals, and a tightly woven plot all go to make this another winner for Baldacci.  I thought the addition of Sam (Samantha) Cole, who he partners with on a local level, is a great addition to the story, Sam's well developed and smartly written, the character works well within the story arc.


I've read the comparison's to Lee Child's Jack Reacher character and I don't see too many similarities. And I'm a fan of Reacher's too. Yes, he's a lone ranger, ex military investigator. But to me, that's where the comparisons end.


I say: read it and enjoy it for what it is, a tightly drawn suspense novel.

This ARE was provided to me by the publisher, and that in no way affected my review.