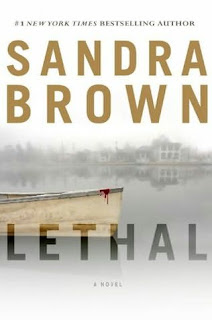 From the publisher:  When her four year old daughter informs her a sick man is in their yard, Honor Gillette rushes out to help him. But that "sick" man turns out to be Lee Coburn, the man accused of murdering seven people the night before. Dangerous, desperate, and armed, he promises Honor that she and her daughter won't be hurt as long as she does everything he asks. She has no choice but to accept him at his word.

But Honor soon discovers that even those close to her can't be trusted. Coburn claims that her beloved late husband possessed something extremely valuable that places Honor and her daughter in grave danger. Coburn is there to retrieve it -- at any cost. From FBI offices in Washington, D.C., to a rundown shrimp boat in coastal Louisiana, Coburn and Honor run for their lives from the very people sworn to protect them, and unravel a web of corruption and depravity that threatens not only them, but the fabric of our society

My thoughts about Lethal:  Sandra Brown doesn't disappoint. However, I'm getting the feeling that her books are getting a bit too formulaic for my comfort level. The story does take you in right away, four year old Emily's mom, Honor, is icing chocolate cupcakes when Emily tells her mom that there's a man in the yard and that he's sick. Emily is concerned, but, like any kid, she wants some of the cupcakes. The opening few pages sets the tone of the book. Common activities of everyday people set the background for uncommon interruptions to their lives.

I liked Honor, I thought she was written in a very believable way, she was as solid a heroine as can be written and Brown wrote Emily just as believable. We quickly learn that this man is no stranger in the yard.  I liked the character of Coburn and thought Brown developed his character smoothly and with multiple layers and secrets. I didn't quite know where he was going and what he was really after. And that's always a plus for me!  What did bother me was that Brown told the story using multiple points of view. I really hate that. For me, the story becomes disjointed and frays into threads.

I generally like Brown's writing, but this just border lined as a bit too cookie-cutterish for me.  I was also looking for a bit more romance. Lethal is one of the books where you can't write too much about the plot because it's too darn easy to give too  much away.  The multiple twists and turns kept me guessing and I didn't have the reveal figured out. So that's a good thing too! However,  I will say this, I hate it when the solution to the mystery is a bit  far fetched. I was not happy with the way things were tied up, so to speak.

But Brown isn't the best selling author that she is by not crafting a good story with engaging characters and terrific plot lines.

I do recommend Lethal, especially if you are already a fan of Sandra Brown's. But to be honest, I'd say wait for the paperback or get it on an e-reader.

I hope Brown gets back to her writing skills that first captured my attention as a reader a few books ago.


This galley was provided to me by the publisher and in no way affected by review.