Death in the City of Light by David King

DEATH IN THE CITY OF LIGHT 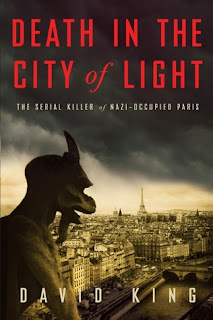 "Death in the City of Light" is the gripping, true story of a brutal serial killer who unleashed his own reign of terror in Nazi-Occupied Paris. As decapitated heads and dismembered body parts surfaced in the Seine, Commissaire Georges-Victor Massu, the head of the Brigade Criminelle, was tasked with tracking down the elusive murderer in a twilight world of Gestapo, gangsters, resistance fighters, pimps, prostitutes, spies, and other shadowy figures of the Parisian underworld.

The main suspect was Dr. Marcel Petiot, a handsome, charming physician with remarkable charisma. He was the "People's Doctor," known for his many acts of kindness and generosity, not least in providing free medical care for the poor. Petiot, however, would soon be charged with twenty-seven murders, though authorities suspected the total was considerably higher, perhaps even as many as 150.

Who exactly was being slaughtered, and why? Was Petiot a sexual sadist, as the press suggested, killing for thrills? Was he allied with the Gestapo, or, on the contrary, the French Resistance? Or did he work for no one other than himself? Trying to solve the many mysteries of the case, Massu would unravel a plot of unspeakable deviousness.


My thoughts:   Don't be mislead by the cover art for Death in the City of Light, this is no graphic novel, nor is it a work of fiction. I saved this review for Halloween because I think there's nothing more macabre than the sick twisted horrors of what takes place in the real world.

David King's book opens on a street in the fashionable 16th arrondissement  neighborhood of Paris, where neighbors are complaining of thick black smoke permeating the area along with a nauseating stench filling the air.  It's a great opening and takes the reader by the hand and pulls you in!   That's a great hook! You are compelled to keep turning the pages, as King begins to paint the grizzly picture of the accused doctor,  Marcel Petiot and the heinous crimes he is accused of committing.

King kept me going for about the first third of the book, then suddenly, for me, the book began to read more like a police report than a horrific true story being related to readers, eager for the truth.  I found myself getting online and hitting the search engines for maps of the city, trying to see what the neighborhood may have looked like in those days of WWII. Trying to find something to relate the history to.  I realize that I have an advance readers copy, and hope that photos, maps, diagrams, floor plans and the like would be included in the final print copy. I researched a bit online and it seems that perhaps that may not be the case. I think it would help the reader put things into perspective. So many people alive back in 1944 are no longer here and I suspect that most of the readers of Death in the City of Light have no idea what the city looked like back then, how people lived and how the neighborhood functioned within the city. I have no clue, but went looking for answers about the smaller day to day things.

While I did enjoy King's book from the beginning, I was equally as frustrated with it, when as I read on, I got more and more bogged down. I felt like I was reading a clinical report.  Testimonies and trial transcripts lost me. Somewhere along the line, for me, Mr. King lost his ability to tie in this reader.  And that's a sad thing.

I do recommend Death in the City of Light, it's a fact based, but gruesome story of a serial killer that raged in Paris about sixty seven years ago, and  that is amazing even to this modern world of 2011.

This ARC was provided to me by the Crown Publishing Company and in no way affected by opinion and review of this book.