Lady of Devices by Shelley Adina 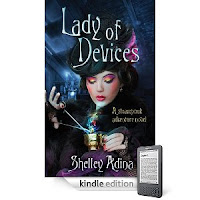 London, 1889. Victoria is Queen. Charles Darwin’s son is Prime Minister. And steam is the power that runs the world.

At 17, Claire Trevelyan, daughter of Viscount St. Ives, was expected to do nothing more than pour an elegant cup of tea, sew a fine seam, and catch a rich husband. Unfortunately, Claire’s talents lie not in the ballroom, but in the chemistry lab, where things have a regrettable habit of blowing up. When her father gambles the estate on the combustion engine and loses, Claire finds herself down and out on the mean streets of London. But being a young woman of resources and intellect, she turns fortune on its head. It’s not long before a new leader rises in the underworld, known only as the Lady of Devices.

When she meets Andrew Malvern, a member of the Royal Society of Engineers, she realizes her talents may encompass more than the invention of explosive devices. They may help her realize her dreams and his . . . if they can both stay alive long enough to see that sometimes the closest friendships can trigger the greatest betrayals . . .

Poor Lady Claire, seventeen and not giving a fig about presenting herself into Victorian society, she's such a frustration to her dear mother, but Claire could not possibly care less about the plans that her mother has for her future. Claire's more interested in blowing things up in the chemistry labs and learning to drive the family's Landau. Lady Claire longs to attend University to study engineering. She's certain that the future will be in steam driven engines and various other devices.  When Claire's father dies,  and his company goes bankrupt, the family comes to realize that their cushy live is now over. With Claire's mother and baby brother, the current heir apparent, fleeing to the country, that leaves Claire in charge of selling their London home and letting their servants go.

When a mob of angry investors in Claire's father's now worthless company decide to riot and burn the family home, Lady Claire is forced to flee the streets of London in the family Landau.  And that's where Claire's adventure begins for real. Accosted in Jack, the Ripper's Whitechapel area of London, Claire's relieved of her belongings and her beloved Landau. She's left unconscious on the street. That is, until a crew of young street urchins find her.  What comes next is a  wonderful story of trust, friendship and help the comes from the most unexpected places.

Shelley Adina's opened the door to the Victorian Steampunk world that fascinates us in today's 21st Century.  Lady of Devices, the first of Adina's trilogy in the Magnificent Devices series is full of wonderful characters from the Lords and Ladies to the charmingly drawn young gang of hoodlums that Claire falls in with. Adina manages to lure us into the steampunk era with joy and excitement. Her plotline is strong and the cast of characters are well interwoven, it's Adina's vivid descriptions of Victorian London that make you turn the pages.

This may have been written for the YA audience,  but it's certainly something I will follow and recommend. Adina manages to not only tell an engaging story, she also ever so sneakily weaves in some lessons in honestly, morality and what it's like to be a true and trusted friend.

I liked it and look forward to reading the next book in Adina's Magnificent Devices series.

Lady of Devices gets 4 out of 5 stars from me.

This book is from my own library, I happily purchased it in Kindle form with my own pennies. You should too!

Email ThisBlogThis!Share to TwitterShare to FacebookShare to Pinterest
Labels: Lady of Devices, Shelly Adina, YA steampunk