Congratulations to THE KING'S SPEECH for their 4 Oscar© awards!!

The King's Speech  took 4 Oscars© last night, and is based on an original screenplay.  However the book written by Mark Logue and Peter Conradi, The King's Speech: How One Man Saved the British Monarchy in my opinion goes  hand in hand with the film's story.  Author Mark Logue is the grandson of Lionel Logue, played by Oscar© nominee Geoffrey Rush, who was the speech therapist who worked with King George VI on his debiliatating stutter. Logue was located by the future King's wife, Elizabeth ( know to most of us as the Queen Mother) and was played by Oscar©  nominee Helena Bonham Carter. Of course we know that Oscar ©  awards were awarded for  Best Original Screenplay, Best Director, Best Film and Best Actor, a first award for Colin Firth.
I highly recommend Logue's book!  Read it and see the people behind the film. 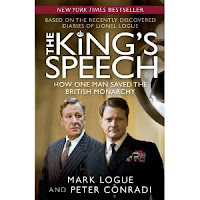