"The Thin Man" to be remade? 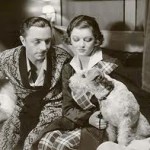 In a fabulous book-to-film bit of news, it seems Johnny Depp and Warner Bros are eyeing the classic 1930's film The Thin Man, because Johnny Depp wants to remake it with his Pirates of the Caribbean: On Stranger Tides director Rob Marshall. Seems Mr.Depp and Mr. Marshall are fans of the legendary sophisticated Dashiell Hammett novel and also the series of six MGM films that starred William Powell and Myrna Loy. Depp could be perfect as the snappy Nick Charles, who marries up when he weds wealthy socialite Nora, and then commences to begin a fun romp of drinking and  a sort of ratiocenation like sleuthing with the clever Nora (and a martini) always at his side.  "The Thin Man has long been a favorite of mine and with Rob at the helm, I know we're in great hands," Depp said. Added Warner Bros Pictures Group president Jeff Robinov: "There is no one more perfectly suited to portray Nick Charles than Johnny Depp."

I'm off to the library to grab a copy of the Hammett original.

Look for more "books to film" news in the future!
No comments:

Eighteen Acres is the story of three women: Charlotte Kramer, the 45th President of the , her White House Chief of Staff, Melanie Kingston, and TV network White House Correspondent, Dale Smith.  All are powerful, smart and savvy. They are living on the edge of an explosive world. One mistake or scandal will bring chaos to them personally as well as to citizens globally. Rumors of infidelity within the White House threaten to expose questionable weaknesses in the President’s judgment. Mishandling of the situation when an attack on the President’s helicopter causes further concerns about her judgment regarding the people she’s put in powerful positions, people whose mistakes could cost the American people their security.  As President Kramer struggles to ignite her re-election campaign, forces are in motion to keep this from happening.
“Eighteen acres” is a term politicos use when speaking of the White House complex. As a former communications director for President Bush and a political media strategist and a campaign advisor for John McCain and Sarah Palin, author Nicolle Wallace certainly knows her way around those eighteen acres very well. She’s given us an insider’s view of what it’s like on the other side of the security fences as we look into the private areas in the White House and at the presidential get-away, .  Wallace’s behind- the-scenes action also takes us into the back-stabbing manipulation that happens within the media and print news arena.
While I expected more of a political thriller, I found the story compelling and an interesting read. Ms. Wallace writes characters that the reader can care about and become invested in. I did find the heavy focus on expensive designer name products a bit off putting coming from people in such high power positions. Am I nitpicking? Maybe. But such name dropping is both distracting and unnecessary in a book of this genre.
I do recommend Eighteen Acres.  It’s a fun fast read, with a nice flow through story about what it would be like to have the first woman president.  I expected a bit more conflict and complexity, but all in all, Ms. Wallace has written a great first novel. I’ll look forward to what she does next!
If I were to give it a “star”rating?  I’d give it 3 out of 5 stars.

Source: This book was provided to me by the publisher at my request and in no way affected by review.
No comments:

I like to give you all a heads up when a film that's book based is coming out and  this sure fits the bill! "THE TEMPEST!" This looks to be a fantastic revisioning of Shakespeare's classic tale!

In her big-screen adaptation of Shakespeare's mystical thriller “The Tempest,” Academy Award®–nominated Julie Taymor (“Across the Universe,” “Frida,” “Titus”) brings an original dynamic to the story by changing the gender of the sorcerer Prospero into the sorceress Prospera, portrayed by Oscar® winner Helen Mirren (“The Queen”). Prospera’s journey spirals through vengeance to forgiveness as she reigns over a magical island, cares for her young daughter, Miranda, and unleashes her powers against shipwrecked enemies in this exciting, masterly mix of romance, tragicomedy and the supernatural.

2010 marks the 400th anniversary of Shakespeare’s “The Tempest.” Amazing!

"Secretariat" is a winner!" 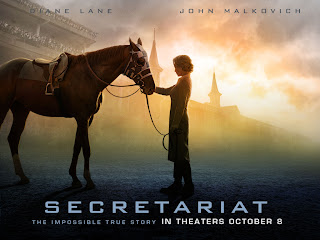 This stunning film plays like the champion Secretariat is. Long on struggle and triumph for Secretariat owner Penny Chenery Tweedy, Penny saw the potential in a horse she believed in before he was born.  Penny juggled a family in Colorado while managing, training and racing Secretariat in Virginia.  Conflict arises when she’s forced to fight her brother and husband to keep Secretariat from being sold to the highest bidder for  taxes…all while being talked down to for being only a housewife. Remember folks this was the early 1970's when being a woman owner of anything wasn't easy, especially a woman who owned a racehorse.

"Secretariat" director Randall Wallace perfectly captured the vital trusting bond that existed between Secretariat and Penny Chenery.  Diane Lane's portrayal of Penny Chenery Tweedy is  so simple and pristine you forget she’s acting. That’s no easy feat as this role could have easily become a hankie twisting screamer John Malkovich as legendary trainer Lucien Laurin is perfectly quirky in a showcase role. But I think Nelsan Ellis as Secretariat’s groom Eddie Sweat is a stand out in a quiet elegant performance that shouldn’t go unnoticed during award season.

Secretariat still holds the record that he set in at Belmont in 1973.

It was lovely to see the real life Penny Chenery in a well placed cameo spot during the Belmont race finish. Look for Penny standing next to Hollis Chenery (played by Dylan Baker) as she reacts to Secretariat winning the Triple Crown in the film.

I really liked this movie, it’s not perfect, but this family friendly Disney movie has the heart and soul of a triple crown winner. I hope we see that recognized at awards season.  In the meantime, take the family to see this movie. Love it for its beauty and simplicity. Like it for the fun of it.

Is there a book connection? You bet there is, Secretariat was suggested by William Nack's  Secretariat: The Making of a Champion.

Review source:  I was offered the opportunity to attend a screening held by the promotional company for this film at my request and my presence there in no way affected my fair and honest review.
No comments: 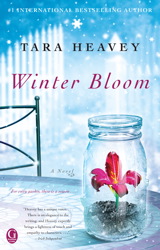 When Eva Madigan entered a neighborhood sweet shop with Liam on a sunny Saturday in October she finally felt there was hope. Something was different. The young widow and her four year old son were new to Dublin, and Eva was having a hard time getting to know people, having a hard time finding a place in the world. Then a chance encounter with mysterious old Mrs. Prendergast (whom gossips suspect murdered her husband and buried him the garden) led Eva to that long abandoned Prendergast garden and a disjointed group of people. Their lives would be forever changed by answering Eva’s blind request for help to work in a community garden.


Mrs. Prendergast’s garden brought together people of all ages and backgrounds. Their only commonality was their love of gardens. Making up the rag-tag group are Uri, a Holocaust survivor and his divorced son Seth, a mysterious young college-aged Emily with a secret of her own, and the sad Eva. As they struggle to reclaim the garden from years of neglect, friendships are made, secrets are shared, and lives are entwined. All is lovely in the garden until one day Lance, Mrs. Prendergast’s son, shows up demanding that the garden be sold.

Author Tara Heavey’s Winter Bloom is a well written, engaging story of loss and our fight for survival by adapting to the things that are beyond our control. I normally don’t review cover art, but I believe this book deserves a different cover. No offense to the designer but this is not a light “chick lit” book. It’s a study of the human soul and I think it should have a less “chick lit-ish” fluffy cover. I highly recommend Winter Bloom and am purposefully being vague about the plot so that as so the secrets and stories unfold, and I won’t want ruin your read. Get it, enjoy it, share it.

Tara Heavey was born in London and moved to Dublin at the age of 12. A former lawyer, she is currently a full-time author who lives in Dublin with her family.

Source: This book was provided to me by the publisher at my request and in no way affected my review.
No comments: