“Today I’m five. I was four last night going to sleep in Wardrobe, but when I wake up in Bed in the dark I’m changed to five, abracadabra. Before that I was three, then two, then one, then zero. “Was I minus numbers?”


To Jack, whom we know is now five, Room is his whole world and his only world. Jack has never been Outside, never felt the sun on his face or the breezes blow his hair.  We quickly learn Jack and his “Ma” are being held captive in a 12 by 12 foot gardener’s shack that’s been outfitted with electricity, plumbing and basic furniture.  Jack is the storyteller and we learn about his world through his innocent eyes. We learn that “Ma” was abducted from her college campus seven years ago at the age of nineteen. We know Jack is her child by their kidnapper, whom they call “Old Nick” because he visits in the night. Now that Jack is five, his mother decides they must try to escape.

Room was brilliantly penned by Dublin born novelist Emma Donoghue, who wisely chose to tell this story from the viewpoint of a child. By doing that, there is no ability to describe their captivity as anything other than the norm. Jack knows no other existence.  Donoghue’s writing captures the essence of the five year old Jack, whose only conversations have been with his mother. He has no reference to other children, no clue about what he is missing, or that his way of life is anything but normal.   Donoghue has woven a believable way of life for mother and child in this trapped situation with the mother doing her best to educate, nourish and keep her child strong through games and homemade toys. While I had a little issue with the ease of their escape, it helped move the story forward quickly.

I was unwilling to put this book down, except when I absolutely had to.  I finished Room in a day and a half. Hypnotic, compelling, spellbinding and fascinating, I highly recommend this book. It’s not always easy to read.  The emotional tidal waves created by Donoghue rip into your heart and soul.   However, the stunningly believable ending makes the anguish worth while. IF I gave a star rating (but I don’t), I’d give it 5 out of 5 stars.

Source: ROOM was purchased by me with my own funds and is a part of my personal library.
No comments:

The Recessionistas by Alexandra Lebenthal 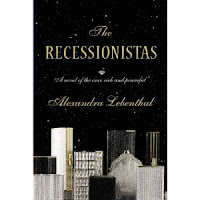 What the publisher says about The Recessionistas -

It's the day after Labor Day, 2008, and the elite universe of New York's Upper East Side is about to unravel along with the economy. Socialite Grigsby Somerset is barely aware of her changing world, and has no idea her investment banker husband Blake is about to enter into a devil's bargain with hedge fund owner John Cutter. As autumn unfolds, Grigsby's fairytale life starts to unwind. Street-smart Renee Parker has been hired as John's executive assistant and is convinced that something is amiss with her new boss.

After reading the description, I thought "The Recessionistas" sounded like a great, fun summer read so I requested a review copy and the publisher kindly provided one for me to read.

I tend to like the "chick lit" genre for light reading and gave this book three tries over the course of two months.  Sadly, I was not able to finish the book.  Sometimes it's not the right book for me or the right time for me to read a particular book.  While I know there are many readers who enjoyed the book, it's just too...superficial. I know that's the point of some books, but this one seemed over the top, and it lacked characters in circumstances that I cared enough about to be involved with and to finish reading the book.

Source: This book was provided to me by the publisher at my request and in no way affected my review.

Email ThisBlogThis!Share to TwitterShare to FacebookShare to Pinterest
Labels: The Recessionistas

TinkerBell and the Great Fairy Rescue 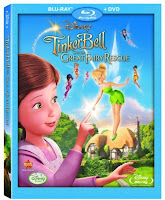 "TinkerBell and The Great Fairy Rescue"
is the third in the series of adventures  featuring Disney's TinkerBell and her friends, in the time before "Tink" meets Peter Pan.  I couldn't  be more excited this movie as we find "Tinker" coming in contact with her first human during a summer adventure in the country.

Lizzie,  a lonely and fairy obsessed  little girl, makes a fairy house and wistfully adds a "welcome fairy" sign hoping to attract a fairy. And she does just that, when the ever curious Tinker Bell wanders in.  Tinker Bell's clever and talented friends then must set off to rescue the trapped Tink from the human.
While the story is a bit "Disney predictable" - a too busy father with a precocious and fearless young daughter who is struggling to gain the eye of her preoccupied dad. This story shows that friendship can be found in the most unexpected places, and that trust, faith and love are the most important things to us all. This is the perfect movie for kids and the adults that love them!  Charming, cute and fun!
This gorgeously produced DVD was directed by Bradley Raymond with voices supplied by Mae Whitman, Michael Sheen, and Kristin Chenoweth. I don't know why this went straight to DVD, I sure would have taken the kids to see this in a theater!
We're anxiously waiting for the next Tinker Bell adventure!
Disney's  "Tinker Bell and The Great Fairy Rescue" is in stores Tuesday, September 21.

Source:  This DVD was provided to me by the studio at my request and in no way affected by review.